Fight to Win is an organization that is putting together professional grappling events.  These events are a lot like what you would expect to see in a mixed martial arts event, such as a UFC, but the main difference is that the matches are strictly grappling oriented.

Competitors face off in either Gi or NoGi rule sets, have a one round time limit match, and are given a full stage to compete in front of the crowd.

Competitors enjoy a paycheck for their participation but are also incentivized to win and further incentivized to finish the match with a submission.  This ruleset encourages fights begin on an aggressive tone which lends to a very fun event to watch.

The team has had a great year competitively which began with a fourth team title, but this night was reserved for the head instructors to showcase the art and principles they teach.

Eliot was first to compete, and he electrified the team, and, to a larger extent, the entire audience with a captivating leg lock submission on a very skilled opponent after a back and forth battle of positioning.  Eliot showed great poise and focused intent as he aggressively attacked his opponent until he secured the win by toe hold.  He wrote his take on the night’s proceedings here.  He was later interviewed by the Folsom Telegraph about his experience.

Thank you for sharing your passion with me! 🙏 💜💚

Next up was Marcos “Yemaso” Torregrosa who set out to begin the match at a breakneck speed.  Within the first moments of the bout, Marcos attempted a flying triangle from a seated guard position with served as a catalyst for exciting action.  Ultimately, Marcos was able to pass his opponents guard with a knee-cut, take his opponents back, and win by strangulation via the bow-and-arrow choke.  The sequence of techniques was a very familiar sight for students of our martial arts academy, as it is one of his most favored. 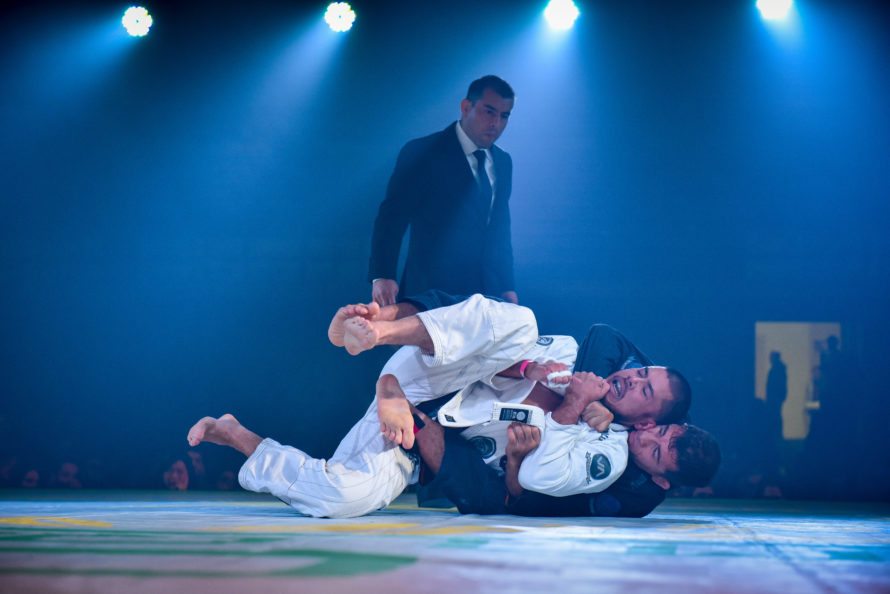 About the night, Marcos has the following to say:

About last night; these pictures capture perfectly what I wish to remember about Fight to Win Pro 8 last night. They reflect the unity and unconditional support of my students, friends, and family that have seen me through many difficult times. I work extremely hard to put smiles on their faces and last night our mission was accomplished with a 2-0 performance for the team! First off, professor Eliot Kelly @eliotkelly vindicated a previous loss with a fantastic submission victory against a super tough opponent via toe hold. Then I came up and finished my opponent with my favorite choke. We both are healthy, happy, and coming home to work hard Monday for Masters Worlds! 😉 thank you to all that came and to those that watched via @flograppling from afar. It is a sacrifice to spend your Saturday pm coming to see us perform yet being in our corner is the only we we can get to where we need to be. We are a product of our environment, I am fortunate to be surrounded by such amazing people! To @nictorregrosa, we did it again babes #loves ! Having you in my life has motivated me to be better and better. I think it shows 😉 #ourera #ourtime to my boy, papi te adora y no veas como me encanta verte feliz! Algún día serás tu él que sube y yo quien te espere ansiosamente, orgulloso siempre de ti. To Team Yemaso @sacramentobjj , all of you are with me when I am out there. The countless hours drilling, training, beating me to a pulp.. I am honored to put it on the line in our name! To my sponsors thank you! @bearsyr @shoyoroach my "Dark Knight" gi in effect, one of my personal favorites! Thank you guys!@defensesoap @defensesoapeu @defensesoapct Keeping me so fresh and so clean with the best soap on the market and to @wartape1 @warworldwide the Vitorre bros for having my back, and by back I mean my hands covered in the best tape. There is a reason it is so widely used in boxing and now in Jiu Jitsu, check the half inch tape out guys, it's sick! On to Master Worlds…… Osu

We are very proud of our black belts, Eliot and Marcos, for taking on the challenge, competing in front of a big audience, and winning gracefully.

Click this link to watch a highlight video of the event.